It’s a lot harder to relax when the sun is pummeling you with heat.

Summer starts next month, and if previous years are any indication, it’s going to be a pretty crispy one. Last July actually went on record as the hottest month in history, with the global temperature about 1.71 degrees Fahrenheit above the 20th century average of 60.4 degrees. You don’t want to wait until it’s already that hot to start taking heat-fighting measures. Start shoring up those defenses so you can have a pleasantly warm summer rather than a screaming hot one.

The backyard’s first line of defense against the summer heat is an awning. It’s not just a matter of shade; breaking direct contact with the sun’s line of sight can do wonder from preventing surfaces (and people) from overheating. You can have a solid awning built over your back deck, but if the notion of excessive construction isn’t appealing, a good alternative is a motorized fabric awning. One button tap, and you’ve got a cool, colorful covering. Just remember to put it away at the end of the day.

If you’ve got some fans you aren’t using, put ’em outside. Desk fans, tower fans, old osculating fans; if it spins, it cools. Just remember to have a few placed strategically around the back deck, or everyone’s going to crowd around one. If you’ve got a solid awning, you can also have a fan installed on the ceiling, which is convenient and fashionable.

If all else fails, it’s time for the old summer standby: the pool. Having an in-ground pool installed can be costly and time-consuming, yes, but you can’t deny it’s cooling capabilities. Plus, if it’s a nice pool and you do a good job of maintaining it, it could raise the value of your home. Alternatively, there’s always the above-ground pool. A little kitschy, but when you’re baking in the summer sun, beggars can’t be choosers. Got Four Bucks? You Can Make Wallpaper 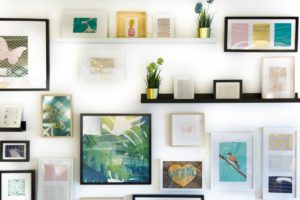